Institute:  How did your career in Hair & Makeup being ?

Maria: I made my my first steps in the world of beauty studying Aesthetics & Cosmetology in my home town Thessaloniki, in Greece. I graduated , after receiving several scholarships, with First Class Honours. Thereafter , i attended Hairdressing, Manicure, Color and style Coaching training and seminar courses. My work was soon discovered and appreciated since i had been chosen as key Make up Artist at National Theater of Northern Greece’s performance “ La Boheme”. Cooperations with Model Agencies in Thessaloniki and Athens followed.

Maria: Greeks value beauty a lot, therefore they hold high standards regarding beauty techniques. Training is diligent. You need to spend at least four years in order to cover all the relevant areas and become competitive in the field. This process is fascinating, creative and challenging, which is very important to me.

Institute: You have collaborated with some iconic brands. What has been your proudest moment to date?

Maria: I am sicerely honoured and grateful that companies like Hermes Paris, Nike and others have picked me for collaboration. If I had to chose one special moment, was when director Mikael Marcimain, who was directing the Nike commercial approached me and thanked me kindly for the highly professional level of my work and the excellent collaboration with him and the rest of his team.

Institute: You are now based in Germany, how are you finding that?

Maria: I have to admit, adjusting to life in Germany was hard at first. I faced many difficulties due to the language barrier. I missed many job opportunities because I only spoke English and not German. But my determination in succeeding kept me going. Now, after four years, my german is acceptable.  I have respectfully adjusted to the german culture and I can say that I am having a great time here. I have already achieved more than I would be able to achieve in Greece in this time. In Germany, there have been people who have trusted me and have given me the chance to contribute to the fashion field.

Institute: We published the fashion story ‘Wing Chun Kuen’ Can you tell us the story behind that editorial?

Maria: Pascal Albandopulos (photographer), has a very interesting hobby called “Wing Chun Kung Fu”. Is a concept-based  Chinese martial art and form of self-defense . His teacher, Olli Marshall makes by hand large, wooden practice dummies, used individually by each student. These dummies were the starting point for the editorial story.

Institute: What are you currently working on?

Maria: At the moment, I have a few make up projects in mind, which I wish to realize with the appropriate peopple. But I cannot get into any details. It is better to leave it as a surprise.

Institute: Do you have a hair stylist/makeup artist you aspire to?

Maria: I could not name one in particular, as I might seem unfair to many others. What I can definitely say is that I draw inspiration from all those artists who have developed the ability to become trend setters. They might be from the newest blogger to the most achieved artist of the planet. 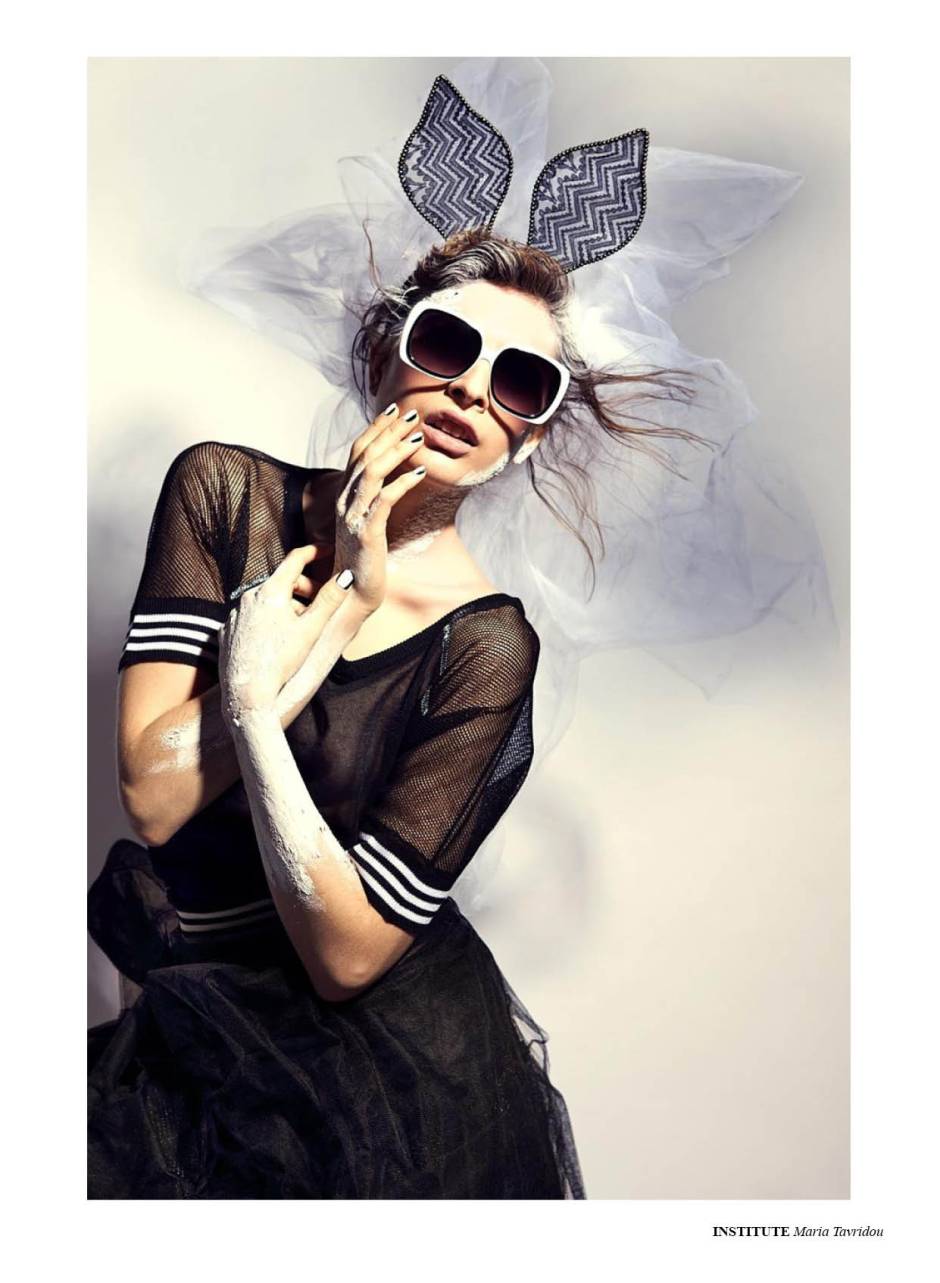 Institute:  What is your creative process?

Maria: I can’t say I have a fixed source of inspiration. I may watch a documentary on the Amazon fauna and observe the colour combinations on birds’ wings; this could be the starting point for a make up editorial. Or, I may come across a new, fresh face, which will inspire me for a certain look. Such was the case with the specific editorial that you have published, where the dummies became the source of inspiration. Sometimes, I happen to have ideas which are not acceptable at the time; they may appear to be too simplistic or too complicated or completely out of context. But some time later they could come to be in agreement with the season’s trend. Like three years ago, when I created a make up look with very light skin coverage and dark green or purple lips. Three years ago, that idea was not interesting, but today, in 2017, we see many large make up companies’ best sellers to be those very shades of lipstick. And this has happened many times.

Maria: Standards have been set high for me during this year, in order to implement goals that have been planned and put on hold in order to mature. I have carefully invested in well organised directions and waiting for the results of my actions. Accomplishments are accredited the right time and at the right place. As now has happened with you, discovering me and for that i thank you a lot.