Institute: You not only star in Autumn Lights but you also produce the film, what made you take the career path as an actor and producer?

Guy: Storytelling has always fascinated me. It’s not only how we communicate, it’s also what helps us make sense of ourselves, our world, and how we navigate within it. And, acting was something I was always attracted to because, for me, it’s storytelling in its most tangible form. Understanding circumstance and intention, the juxtaposition of an emotion and its subsequent action, or lack thereof, are all things you can actually play with. It’s malleable. That’s exciting to me and I love that process. And taking on the role of producer is just another avenue of creation and collaboration, and gives me the opportunity for a greater creative impact. I studied theater but I also went to film school at USC [University of Southern California], so doing both jobs is something that was probably inevitable and are two things I more than just love to do. I hope to continue doing both.

Institute: Who influenced you in your early years? How about now?

Guy: Cary Grant, Gary Cooper, Max Von Sydow, Steve McQueen, Paul Newman, John Wayne, Sean Connery, should I keep going? These are actors whose work I’ve found inspiration in and who I am still influenced by. I grew up watching older films, and I have a great love and respect for the craftsmanship of many of them. It’s incredible how some of my favorite films have managed not to age with time and I think it’s a real testament to the quality in the storytelling of films of older generations and their performances that help enable them to remain relevant in that way. As for Autumn Lights, a lot of my personal influences served in my preparation. [The film’s director] Angad Aulakh and I discussed the idea of imbuing my character David with what we would always refer to as a ’quiet masculinity’. He maintains his emotional-self together in a way men of a different generation did on screen. He’s a modern-day throwback. 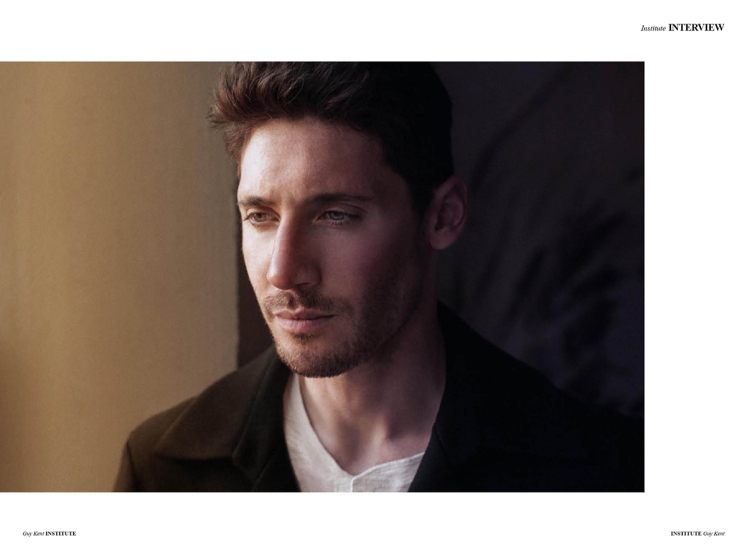 Institute: We are excited to see Autumn Lights. Can you explain how you ended up choosing Iceland as a setting and tell us a little bit about the film?

Guy: Autumn Lights in a greater sense is about what happens when our paths intersect for just a moment in time. The story is set against tragic circumstances and centers on an American photographer who’s on assignment in remote part of Iceland. He stumbles upon a deserted crime scene and finds himself implicated in a local investigation, and it’s during this time, his path crosses with a mysterious couple. Over the course of the story, David becomes wrapped up in the mystery of who these people are and finds himself implicated in the tragedy that is Johann and Marie’s lives. And Iceland as a backdrop is very much a character within this story. The geographical isolation of it and the endless daylight that the story is set in lends a quality to the narrative and the tone that we would not be able to find elsewhere in the same way. But, if you had told Angad and I that we’d be shooting our first film in Iceland a year before, we might have scratched our heads at the prospect. During the year prior, we had put together three different projects, with Autumn Lights being the fourth. We were interested in Northern Europe for a variety of reasons and we quickly narrowed it down to Iceland and the team whom we ended up working with. On top of everything, Iceland has an incredible wealth of talent, both in front and behind the camera. So we were very lucky to be in such great company.

Institute: What attracted you to the role of David?

Guy: We began the conversation on the character early during the development process and discussed at length different inspirations and ideas that were behind David. He has an enigmatic quality to him that I initially found intriguing but behind that, there’s a very three-dimensional, complex character that I found very compelling. He can be both naïve and shifty and he has an intense inner life. He’s someone who exists within the confines of his own world, and he doesn’t always acknowledge that his actions are governed by outside consequences, which is part of his naiveté and aloofness. But at the same time, there’s an authenticity and earnestness to David that is redeeming. There’s also a lot that he never acts upon, which was a challenging yet rewarding aspect to play with. He holds his cards close to his chest and is an observer by nature.

Institute: Would you say Autumn Lights is a standout moment for you in your career?

Guy: Absolutely. This film is a first for me in so many ways. It was an incredible experience not only to shoot our first film in Iceland and Paris but I also feel incredibly fortunate for what I’ve learned and the people whom I’ve met along the way. I’ll always look back on this film with an immense sense of pride and gratitude.

Guy: I guess I’d say that I’m pretty relentless in pushing myself, which is probably why Angad and I work well together. We’re both firm believers in creating your own opportunities and I think that requires focus and commitment. That outlook and drive I think is difficult to find in others. We knew that if we were going to make our ambitions a reality and in a short timeline, we had to remain relentless. And Autumn Lights is a product of that. I think it also helps that we love the work so intensely, so the work has actually never felt like work.

Guy: It’s a mercurial industry and I think fear of that is not exclusive to actors. There’s a lot of unknowns and that can be terrifying of course. But such is life. There’s a level of fearlessness required and so I think it’s healthy to acknowledge your fears, but I think it’s important not to give them too much power and recognition and to use them in a positive way.

Guy: It’s been a collection of people, a network of support. I’d say Angad Aulakh, my producing partner, has had an indelible impact on me. I think we enjoy working together because we have a great mutual respect and we’re both tireless in our pursuit, and that’s just a way of being that we share entirely. He has a unique set of eyes on the world and on the human condition, which makes him an interesting storyteller. He also has an insane film vernacular which I’ve learned a lot from.

Institute: How do you keep yourself occupied in-between projects?

Guy: I’ll let the mystery lie in there, how about that?

Institute: What are you working on at the moment?

Guy: Readying our next project which we’re really excited about. I look forward to sharing more on that very soon.

Favorite restaurant: Blossom in Silverlake has the best pho in LA.

Latest purchase: A new leash for the pup

Currently listening to: “Because I’m Me” by The Avalanches

You can never have too many: Altoids