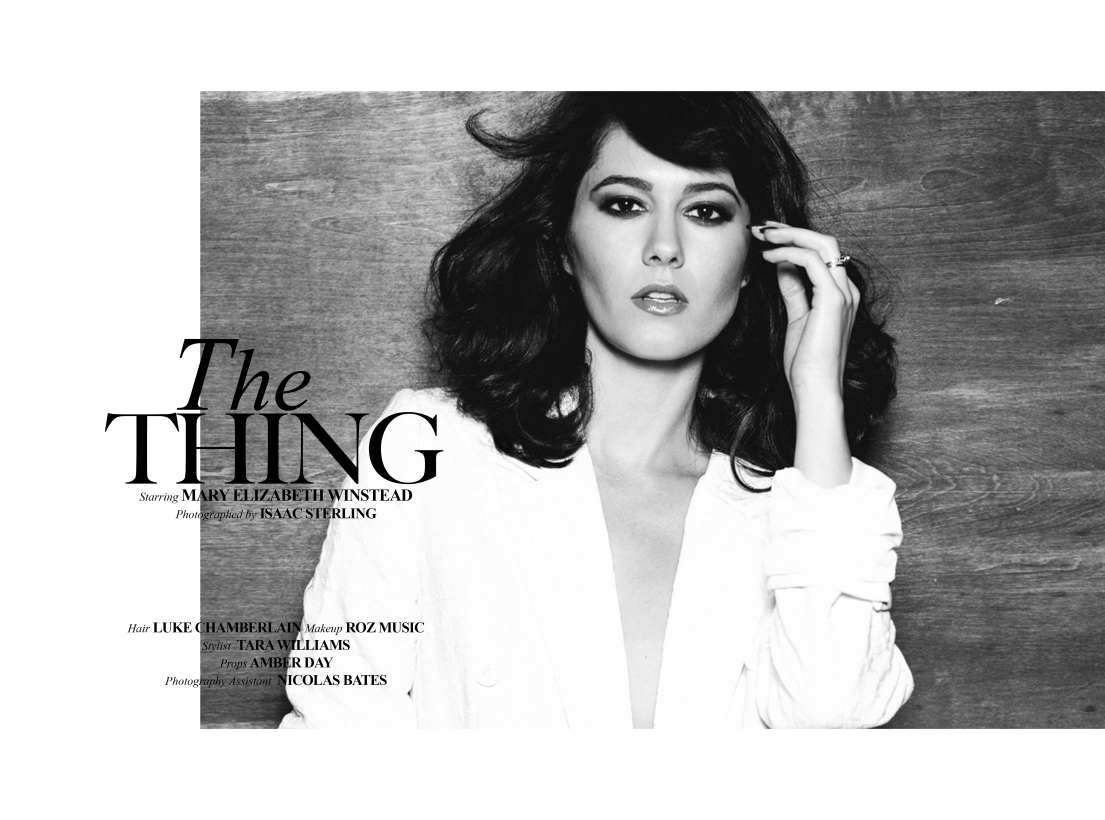 Institute: What made you take the career path as an actress?

Mary Elizabeth Winstead: I’ve always been a performer in one sense or another- from the time I was about 2 years old. I always needed to be singing or dancing, and I gravitated towards a stage whenever I saw one. I tried my hand at pretty much everything in that realm, and as soon as I got the chance to act I knew there was no going back from that. Especially once I realized it could actually be a job. I was, and still am, in awe of the fact that you could be paid to do something so incredibly fun. 2014 has quite possibly been the best year yet for me. I feel like I’m doing the kind of projects and roles I’ve always wanted to do and very much on my own terms which is something I’ve really tried to work towards. My husband and I made a feature film together this year called “Faults” and I’m so proud of it. It was amazing to get to see something come to fruition like that by one another’s side.

Institute: We are excited to see ‘Kill The Messenger’ can you tell us a bit about that?

Mary Elizabeth Winstead: Kill the Messenger is a true story about Gary Webb who was a journalist for the San Mercury News in the mid nighties. He fell into this incredibly huge story involving the CIA and their ties to the crack epidemic in the US. Basically the CIA was aware of drugs being trafficked in large quantities into the country by people who were involved with the Nicaraguan Contras, and did nothing to stop it. The story became huge and salacious and subsequently very exaggerated as it was picked up by other outlets, and people tried to get Webb to back off the story. But he refused. It’s amazing that this happened in our recent history and we hear so little about it.

Institute: What drew you to the part of Anna Simons? Institute: How was it working alongside Jeremy Renner?

Mary Elizabeth Winstead: I was very excited to play Anna, as she’s the editor of the paper and quite an authoritative figure. And yet, she is still young and relatively inexperienced and not perfect. She’s smart and strong, but also fallible. She gets in a little over her head when the story breaks and her relationship with Gary becomes strained. It was great to get to play out this friendship/working relationship with Jeremy onscreen. He’s such an incredible actor and it was so easy to feel so many things for him in any given scene. Gary can be very frustrating for Anna at times, but what she sees him go through is ultimately heartbreaking.

Institute: You have worked alongside some incredible talent, who has been the most influential?

Mary Elizabeth Winstead: It was great to watch Jeremy work- he’s such a free and instinctual actor. You never know what choices he’s going to make from scene to scene and that’s always really exciting and invigorating to act alongside. I’ve been lucky to work with a lot of actors who inspire me in so many ways.

Institute: You also star in this years anticipated ‘The Hollars’ What was the auditioning process like?

Mary Elizabeth Winstead: In that case, John Krasinski wrote me a lovely letter asking if I would play the role and I was more than happy to oblige. I hadn’t met him before but was excited to get the chance to work with him as well as the rest of that amazing cast. Speaking of inspiring actors- Richard Jenkins is someone I’ve been lucky to be in a couple films with now and I think he’s an absolute master. Just jaw droopingly brilliant. 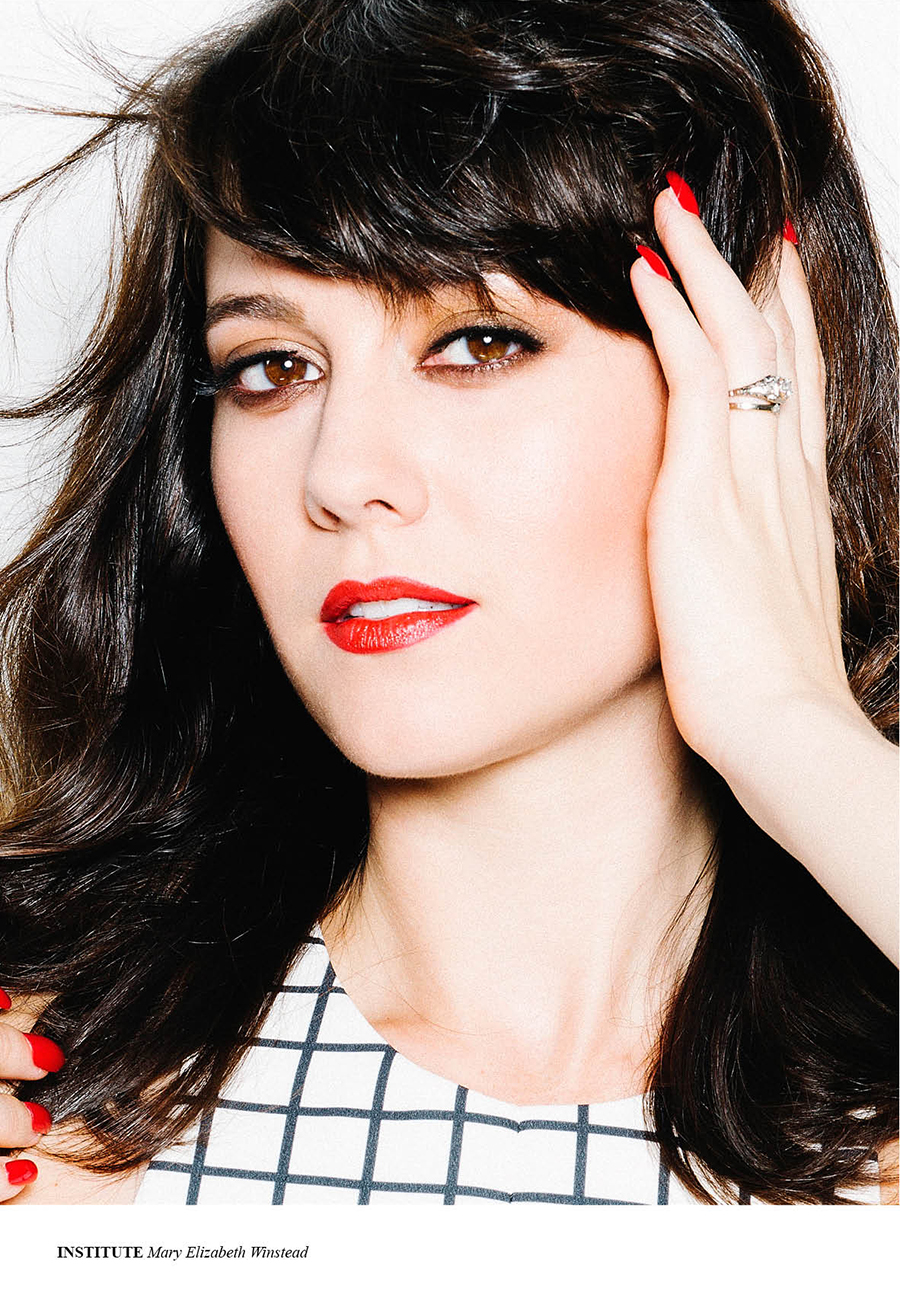 Institute: How do you keep yourself occupied in between projects?

Mary Elizabeth Winstead: This year has been so busy with work I haven’t had time for much else, which is of course a good problem to have. Ultimately I try to make time to visit family who are spread out all over the country and to be at home with my husband and our dogs. I have a band called Got a Girl with Dan the Automator, so that’s been a fun diversion from acting. We write and record and perform when we can. We put an album out just this past July.

Institute: What has been a stand-out out moment in your career so far?

Mary Elizabeth Winstead: I’ve had a few that have felt like personal milestones for me, but I think the film that still stands out for people is Scott Pilgrim Vs. the World. I feel proud to be known as “Ramona Flowers” to the fans of that film. It’s gained quite a cult following over the past few years and I really hope it continues to grow. I’d be more than happy if that turns out to be the project I’m remembered for because it’s just such a great and completely unique film.

Mary Elizabeth Winstead: I push myself hard in terms of what I expect of myself- I push myself not to settle or be lazy as an actor. But I’ve never been a complete workaholic. I definitely need balance in my life.

Mary Elizabeth Winstead: Of course failure is a huge one. For me one of my greatest fears has always been not reaching my full potential. I want to always be working to get better. I’d be really sad if I ever gave up that need, and I definitely have a fear of losing it.

Mary Elizabeth Winstead: I did a film called Smashed a couple of years ago and it was a real turning point for me. Something in me clicked wen I was working on that film, and I really understood how it felt to be doing the kind of work that makes me truly happy. So I’ve been trying to follow that voice ever since. I’m really thankful to James Ponsoldt, the director of that film, for helping me find that voice.

Several pieces from a shop in Vancouver called Oak and Fort

you can never have too many

mornings of sleeping in late

Anything by Renee Rouleau skin care her products are the best. My favorite is the Vitamin C and E serum. Beauty tip – Always wear sunscreen. I also love Elizabeth Arden 8 hour lip cream and apply it often. I like a relatively clean moisturized face versus a lot of make up.

favorite website I spend a lot of time on Jezebel.com. It’s just one of those sites that if I go to it, I know there will be pages of content I won’t be able to stop reading. For shopping I’ve discovered the Outnet.com which is discounted designer clothing, and is dangerous for my online shopping habit.

where do you think trends are created – Definitely within youth culture. I find myself scoffing at the “things kids are into these days” only to sometimes adopt those same trends down the line. I like to think I don’t fall prey to trends but I’ve noticed this happening a few times!